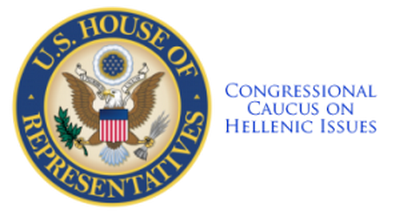 On October 1, 2015 a policy summit on current Greek developments and prospects was organized by the Hellenic Caucus of the US Congress, co-chaired by Hon. Gus Bilirakis (R-Florida) and Hon. Carolyn Maloney (D-New York). The summit comprised three sessions: (a) Administrative and Business Reform, (b) A View From Greece, and (c) Regional Security Discussion.Each session was chaired by a moderator and included three panelists.  The purpose of the Summit was to explore how U.S. policies can be best utilized to provide technical and security support to Greece, which is currently undergoing both economic and migratory crises that are likely to persist in the foreseeable future.

I participated in the first session as a panelist, along with Mr. Pavlos Geroulanos, former Minister of Culture and Tourism  of Greece, and Mr. Ted Diamantis, international businessman.  The session was moderated by Prof. Ismini  A. Lamb, Director of Modern Greek studies at Georgetown University. The panel discussion and participants’ expertise focused on administrative and business reform in Greece and how it can help bolster  growth prospects in the country, especially through foreign direct investment.

My main theme was that the current agreement with European partners includes all areas of desirable structural reforms, but implementation could be a problem. Based on my experience from previous agreements while I was at the IMF Board, I suggested that unfinished projects were not always due to lack of political will, but frequently due to capacity constraints faced by the Greek civil service. To avoid similar difficulties in the future, I recommended that international creditors and donors be parsimonious in their demands on the Greek authorities, including a better prioritization of reforms and a more realistic timetable for their implementation. You can read my full remarks here.